Everyone knows South Park. I’ll admit I haven’t watched an episode in at least 5 years, but once I saw this data set I had to dig in. It’s a prime sample to do some quick and dirty linguistic pattern search. It also provide us with a way to understand how to “measure” language.

The data lives here. Just FYI, this will be less of a coding tutorial and more of a linguistics based tutorial so the code I show here is not optimized. In addition, I wanted to into making fancy plots so I am back at trying different types of data visualization. Channeling Mona Chalabi…For the non-plot visualizations I used Canva.

The first thing I wanted to look at was common phrases. There multiple ways to do this, but a straight forward way is looking at n-grams. Put simply, n-grams are sequences of words that commonly appear together. They provide context and meaning to a given word or combination of words. Good examples are “New York City”, “White Chocolate Mocha.” Here’s what I found from South Park.

Here are the top 2-grams to 7-grams and the quick recipe I used to get them.

“Oh, my God, they killed Kenny! You, Bastards!”

Looking at parts of speech on its own won’t solve any NLP problems, but it can help us understand the text we are working with. This is particularly important if we want to find any sort of linguistic patterns.  To be honest, I am not expecting much out of the words that will come up here since it’s South Park and the show is not known for using a diverse lexicon, haha.  The NLTK library has a lot of tools to flag parts of speech. A really approachable one is pos_tag. I encourage you to look over the documentation! Here are some of the parts of speech we can flag with this function:

Here are the results! PS. I ignored some words that should have been stop-words or were repetitive.

So, this seems right up there with the sort of words we hear in South Park conversations.

Lexical density or diversity is a great way to measure how many unique words are in a given context.  Here we measure it by diving the number of unique words over the total number of words.

Also, I took a look at number of lines, unique words and word count by the top characters. I defined top characters as those with the most amount of lines spoken in the show. Here’s the table of results! 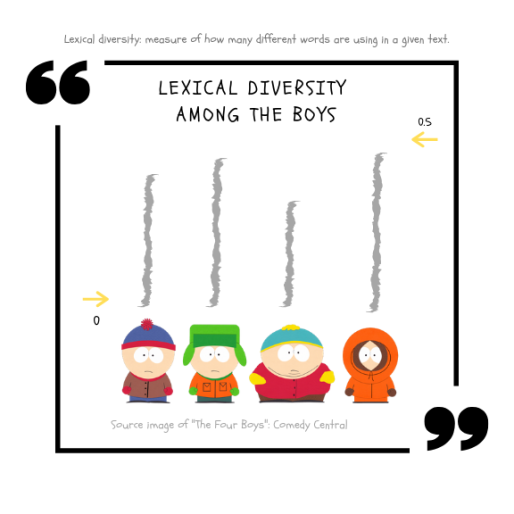 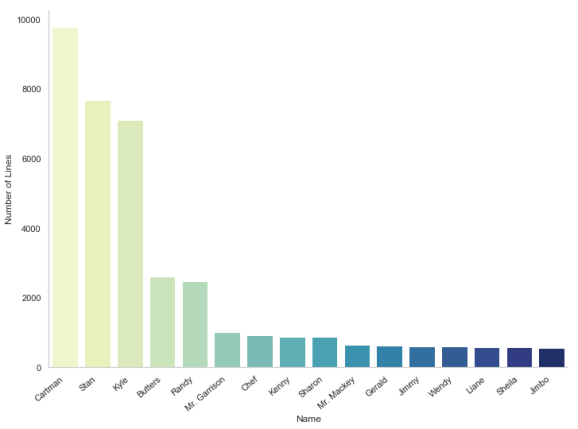 So, it seems that Cartman has both the most unique words and number of lines used in the show, followed by Stan and Kyle.

Finally, I wanted to see if there was any sort of correlation between these text features.

Here are the plotting recipes!

And there you have it, folks! Hope it’s been fun!