Often we will be dealing with text; short or long, and often we only want to find out the important keywords of said text. As with most things, there are several algorithms out there that you could use for this. A common one that you’ve likely even used before is TF-IDF, but there are others like the RAKE algorithm that can perform very well.  The crucial step in any of these keyword algorithms is to spend time carefully cleaning and preparing your data in order to pull out the keywords that really matter to that text.

For this tutorial, we will use TF-IDF. Sure, there are many other more complicated algorithms out there, but I always find that understanding and working through the simplest algorithms first can provide us with a wealth of knowledge before diving into more complicated adventures. TF-IDF will help us pull out terms that are undervalued aka, important keywords.

In a nutshell, these are the steps you’d need to take in order to perform a keyword extraction:

For this tutorial we will a dataset containing 11,000 amendments made to the USA constitution between 1788 – 2014. The data lives here. Let’s now look at these steps in more detail.

First, let’s try to understand what TF-IDF is and how it works. In quick terms tf-idf is the product of the term frequency and the inverse document frequency. The term frequency measure how frequently a word or term occurs in a given document. Because every document is of different lengths said term can appear multiple times in a given document. This then can cause unneeded bias towards a word just because it appears 20 times in one document.  To deal with this, we first consider documents to be bag of words – where word order does not matter – and we bring in the inverse term frequency to punish these words. Mainly, just because a term appears 30 times it does not mean that it is 30 times more relevant.  If you take anything from this post, let it be that keyword relevancy is not proportional to frequency.

As you can see, tf-idf increases with the rarity of a word. With that out of the way, let’s start implementing this baby! These are the libraries you will need!

Now, let’s define a few functions that will come in handy in cleaning our data and finding the ranked terms later on.

Now, let’s read in the data and make sure our columns are of the right data type.

Then, let’s start cleaning our data with the functions we define above. Do note, that this will DEPEND ON YOUR DATA. Don’t just blindly remove stop-words or clean a certain way just because I am doing it here. You will need to decide what is best for your dataset.

Now, we will inspect and decide whether we want to remove common and uncommon words.

Cool, so by looking at this I feel pretty confident about removing these words from the corpus.

Now, we are ready for some keyword extraction! I will set up the ngram parameter to 2-4 since setting this up to 1 rarely spits out anything useful.

Wut. Y’all we did it! Let’s try to visualize this initial output.

This is really interesting because we can clearly see important events in our history through these keywords!

Now, that we have that done, for fun, let’s see what sort of themes can we find. I will use NMF for this. If you need a refresher on this, please refer to my previous posts. Here’s the quick recipe:

From this we can see that women suffrage, popular vote, religion, abortion and debt reduction are all big themes here and it seems that they have been for a long time.

To satisfy my curiosity, I applied the same logic we just did above but I split the data in 30 year buckets. 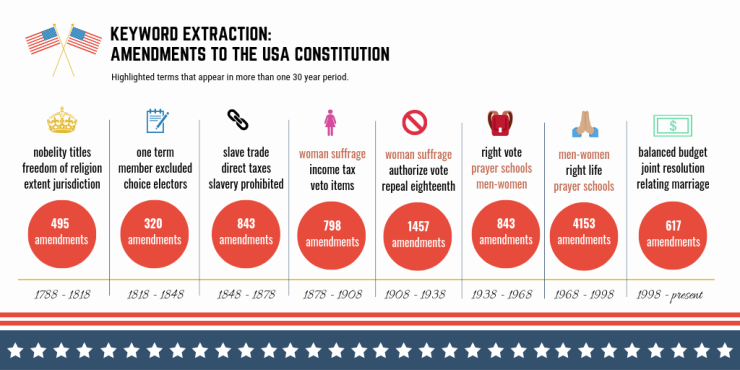 In the photo above, we can see the number of amendments throughout our history and the important keywords in those 30 year buckets. I’ve also highlighted the terms that appeared in more than one 30 year bucket. And there you have it – US history in keywords!