An Ode to Crafting

I am not sure why or how I was drawn to “making things”, my parents didn’t really have any hobbies, but I always had this drive to make stuff. Maybe it was because I was the only girl in a family boys and I wanted something to keep me busy, Initially, I wasn’t drawn to any particular type of crafting, but I got my first taste of it when I was, maybe, 11 years old. I was in middle school at the time and there were two creative competitions; one for poetry and one for drawing.  I couldn’t tell you why, but I joined both competitions. Perhaps, at the time, it was a way for me to cope with the environment around me: my dad worked abroad so we didn’t see him very often and my grandmother had just passed away.  I remember arriving from school that day and telling mom about the competitions.  I don’t know if she remembers that day or not, I guess I haven’t asked her, but she was eager to help me create my masterpieces.

For the poem, I remember googling (did we have google back then? maybe it was msn, geez, I can’t remember) and trying to find ideas for this poem. I ended up wanting to write a love poem because, why not, I was 11, I knew all there was to know about love. The drawing competition had to be a “national” drawing, so I chose to draw Puerto Rico with a sea shell on top and a massive hibiscus flower coming out of the sea shell.  I had no idea how to draw at the time and my mom told me “go get an amapola (Puerto Rican word for hibiscus) from the garden and try to trace it on the paper” and so I did… I remember thinking how therapeutic it felt. That week my mom and I spent working on those two projects, I vividly remember us forgetting all the crap that was going on in our lives and for a few hours a day we’d focus on making something pretty.

Drawing and painting was one way for me to step away from reality, but I also found comfort in my mom’s cooking. I don’t think my mom ever really loved to cook, but she cooked well.  I remember seeing her coming home from work after, we were three siblings and handful at that, and she’d come up with a full course meal. I can barely do that now and, objective, I have it much easier than she did. A talent, for sure. One of my favorite dishes is Puerto Rican Dumplings and mom made the best ones. She couldn’t make them that often because they really aren’t for your, oh, but they are such a treat!  The warm pillow-y dough, ready to be dipped in a delicious bean stew. I treasure the times I sat my mom and brothers to eat dumplings – the one meal we all liked!

Every Puerto Rican mom has her own recipe of making dumplings, but this is our recipe. PS. THIS IS THE ONLY TIME I WILL TELL YOU A BACK STORY BEFORE GIVING YOU A RECIPE.

I started college in 2007.  I was 17 years old.  Young, full of ideas and wanting to do it all.  During my first year as an undergraduate student, I applied to an REU program in Chile and to my surprise I was selected. I mean, I knew I was capable, but I was some young girl from a tiny town in a tiny island, hadn’t even finished her first year of college and there I was traveling to South America on my own at 17 – thrilling.  Chile was a shock. Chile, the country and the people, were incredible and welcoming. The REU, not so much.  As many people in STEM have experienced, my advisor at the time was not supportive, I had no idea how to do research and he wasn’t there to help me.  I remember feeling so defeated because all I needed was some guidance to get myself going.

A girl named Claudia was part of the REU program as well. She became such a big support figure for me while I was in South America. She was/is an amazing knitter.  Due to the hot weather in Puerto Rico, knitting is not something people did back home, but I was mesmerized by Claudia’s fast had movements.  She’d knit and she’d tell how I’d get better at research over time and to not to get discouraged from this experience.  I asked her if she’d teach me how to knit and she delightedly said yes.   Look, I sucked. But, Claudia sent me down this beautiful path of knitting.  I would knit and knit and knit and I felt some relieve after every stitch. Not only that, I felt my self-esteem go up, I felt that yes, if I had the right guidance, I could do anything I set myself to do. I felt victorious. I saw Claudia one more time a few years after that REU program and I wish I had told her how much her presence there meant to me.

When I left Chile, I didn’t keep up knitting, but that wasn’t the last time knitting and I would meet.

After I graduate from college, I knew I was going to go to grad school, but I didn’t want to go right away.  I decided to go to Spain and teach English and Math to elementary school kids. While I spoke Spanish, Spain was a complete culture shock.  I was far away from home and my only contact was a Spanish colleague I’d met at an REU program a few years back. If you’ve ever lived abroad, you’ll know how lonely it can be, so I took the matter into my own hands and found an outlet for me to meet people. And, there it was, a magical place in Madrid called La Laborteca. 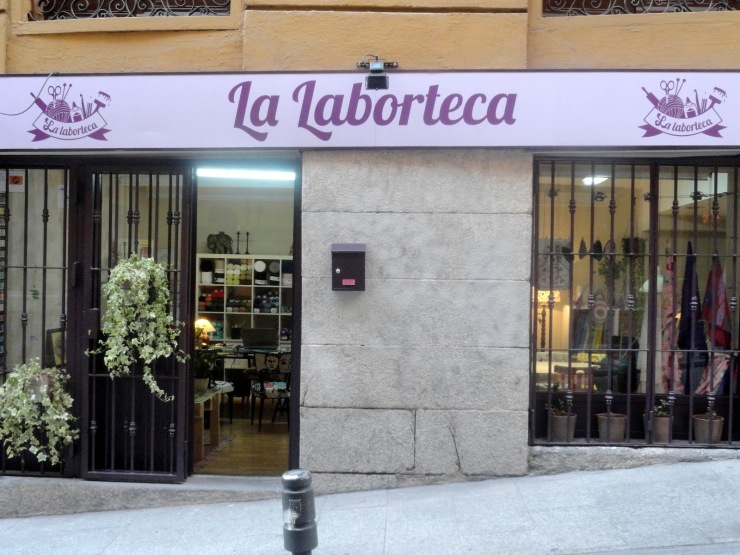 La Laborteca did it all…sewing, knitting, crocheting… See? I told y’all knitting and I would meet again. I started taking formal knitting classes. I’d go every Saturday from 9 am to 12 pm. The owner’s son was a baker and would always bring us cookies.  The owner was the sweetest woman I’ve ever met, so patient and taught me so much.  When it came to knitting itself, I still wasn’t good by any means at the time, but I kept trying. The support from the other women in the class kept me going as well. I felt supported, knitting supported me, the group supported.  It didn’t feel so lonely anymore. A few Saturdays later, I finished my first scarf – it was…questionable, but I wore it with pride!

Knitting was with me on every bus ride, every solo dinner, every time I felt sad or happy.

Grad school taught me a lot. As for most graduate students, it can be quite challenging for a variety of reasons. I didn’t struggled academically, but I struggled emotionally. I was bullied by one of my officemates. The University dealt with the individual, but going through the experience wasn’t easy. A lot of times, I felt I was at fault, I must have done something.  Crafting was my support. I was able to leave the office, go to the sanctuary of my apartment and craft away.  I became a really good knitter while on grad school… I could knit anything. I also started to teach myself cross-stitching and embroidery and baking. If I could focus on making the pretty things, on learning new things, then everything would be fine and I could overcome this. 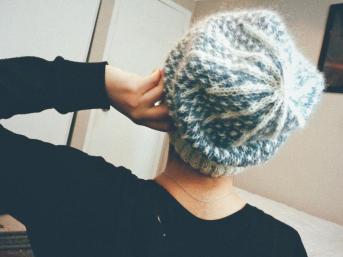 Sometimes the results were good…Other times, not so much…but, I kept learning, I kept making.

5 years ago to present

After I left graduate school and joined the working force as a data scientist and opened an Etsy shop on the side to sell some of crafts, my relationship with crafting changed significantly. I fell was so deep in corporate work and making crafts for social media that crafting became a chore that I felt that I had to do.  Fast forward a year a later, I met my husband and had my first child and crafting became secondary.  As silly as it may sound, I felt as if I had betrayed an old friend who’d been there for me for so many years, but I just couldn’t find the energy to craft or find pleasure in crafting.  It may have been because I had no time, or because I wanted to post about my crafts on social media and that’s why it became a chore…I don’t know. So, I didn’t craft for a good while. I closed my shop and any related social media and moved on.

Earlier this year I had a baby, but before the baby came, I started having that need to make. Was I nesting? I don’t know, but I didn’t question the feeling and gave into it.  It’s as if this friend, crafting, new what was coming ahead and I just didn’t know it yet.  In the couple of months before the baby was born, I gave all my energy to making art for the nursery and decorating it as best I could. I also wanted to bake ALL the time. I became quite good at it if I say so myself.  I even dare to post some of the stuff I make ONLINE for the world to see. 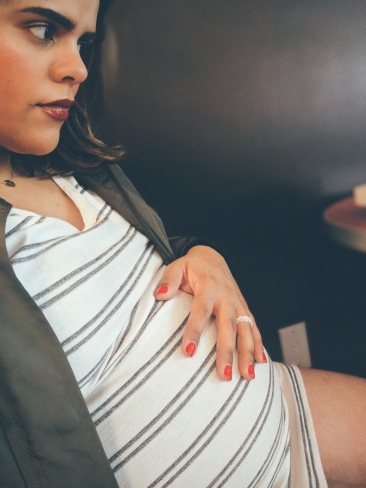 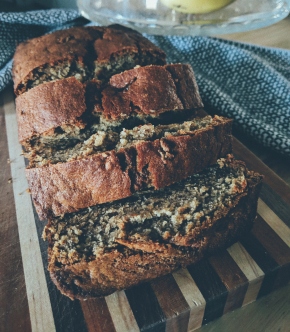 After the baby was born, it was isolating…Anyone who says maternity leave is easy or is a vacation, simply has not had a child. You sit there… with this new human being that is completely dependent of you while you’re in extreme pain from childbirth and emotions are high.  You don’t talk to anyone, you don’t see anyone for months. It ain’t easy.  I found solace in crafting while my baby was asleep or my husband cared for her.

Once again, my trusty friend was there to catch me before I fell. This time around she taught me how to sew, how to be a better baker, to make illustrations, among other things.  I felt the thrill of making again, that drive to be better and to do better. 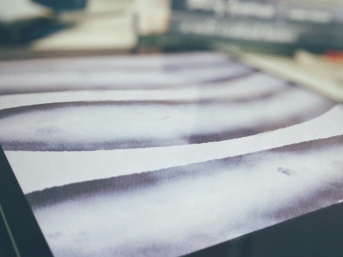 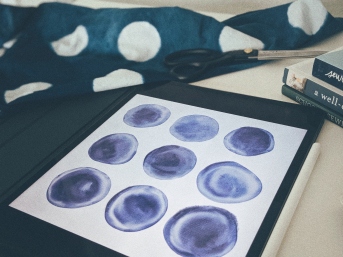 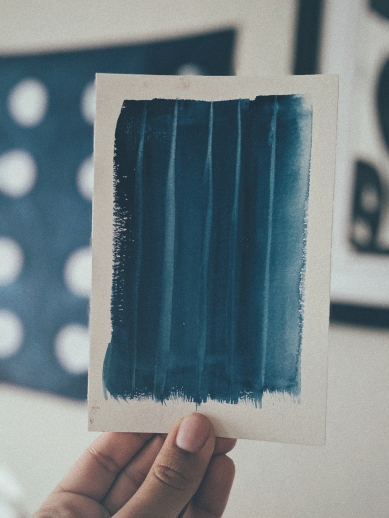 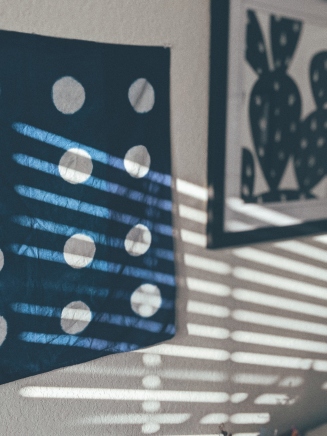 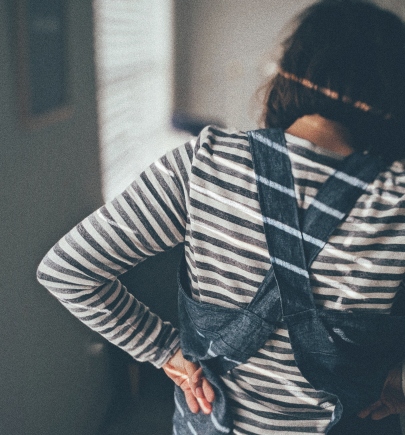 I made things. Thank you, friend.